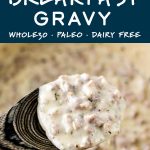 My breakfast savior during Whole30! This Sausage Breakfast Gravy is made using almond milk, broth, coconut cream, and thickened with arrowroot flour for a gluten-free and dairy-free breakfast of champions! Serve over biscuits or potatoes for maximum comfort food status!
Jump to Recipe 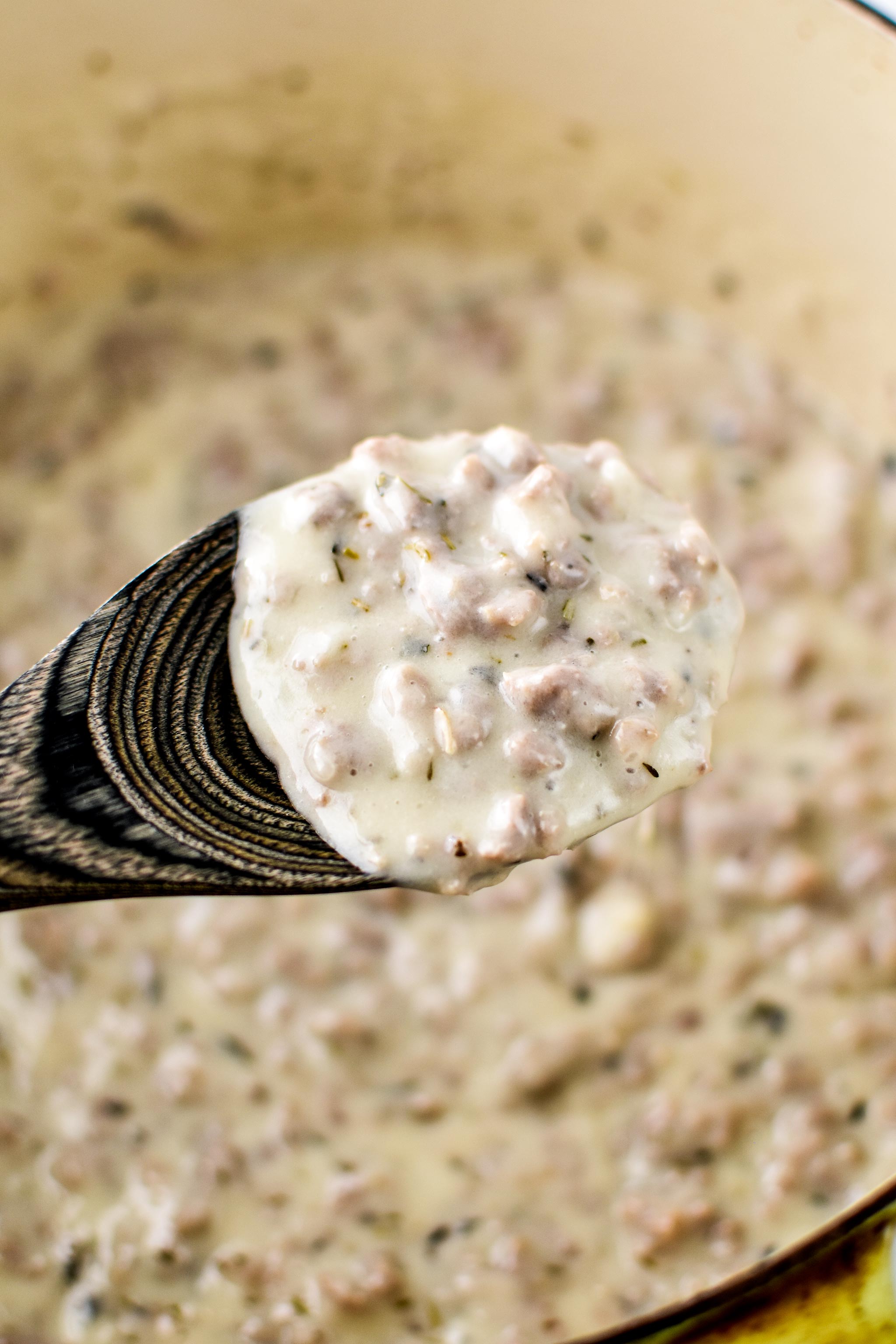 With my very first Whole30 month almost over, I thought I would celebrate with my favorite recipe discovery of this whole experience. That is – thickening gravy without regular flour or butter.

I wasn’t originally planning to post any overly complicated or “fancy” paleo recipes, since I don’t normally follow a paleo diet. Sticking to basics that we would also eat when not doing Whole30 was an unwritten priority this month.

But this gravy is not complicated at all. And I absolutely plan to keep making the recipe once Whole30 is over. It’s THAT good. Even if most people don’t feel like trying this paleo gravy situation, I’m still posting it for me because I don’t want to forget about it (especially during future Whole30s!).

Can you make gravy without flour?

As I learned during this round of Whole30, YES. Gravy can be made without flour, and without butter for that matter. An alternative to flour-based gravy is starch-based gravy. This recipe specifically uses arrowroot starch (or flour or powder, same thing), but other types of starch also work as a flour substitute.

If you’re not following a paleo or Whole30 diet, you can certainly use cornstarch instead of arrowroot. You can also use butter instead of ghee if you’d like, since most people are more likely to have these products in their home. Use whatever works for you!

What kind of sausage should I use?

Personally, I don’t eat much red meat. But when I do, it’s going to be from ButcherBox (affiliate link!). All their meat is sourced from small & family farms (think, NOT industrial farming), organic, free of antibiotics and hormones… ALL the good stuff! 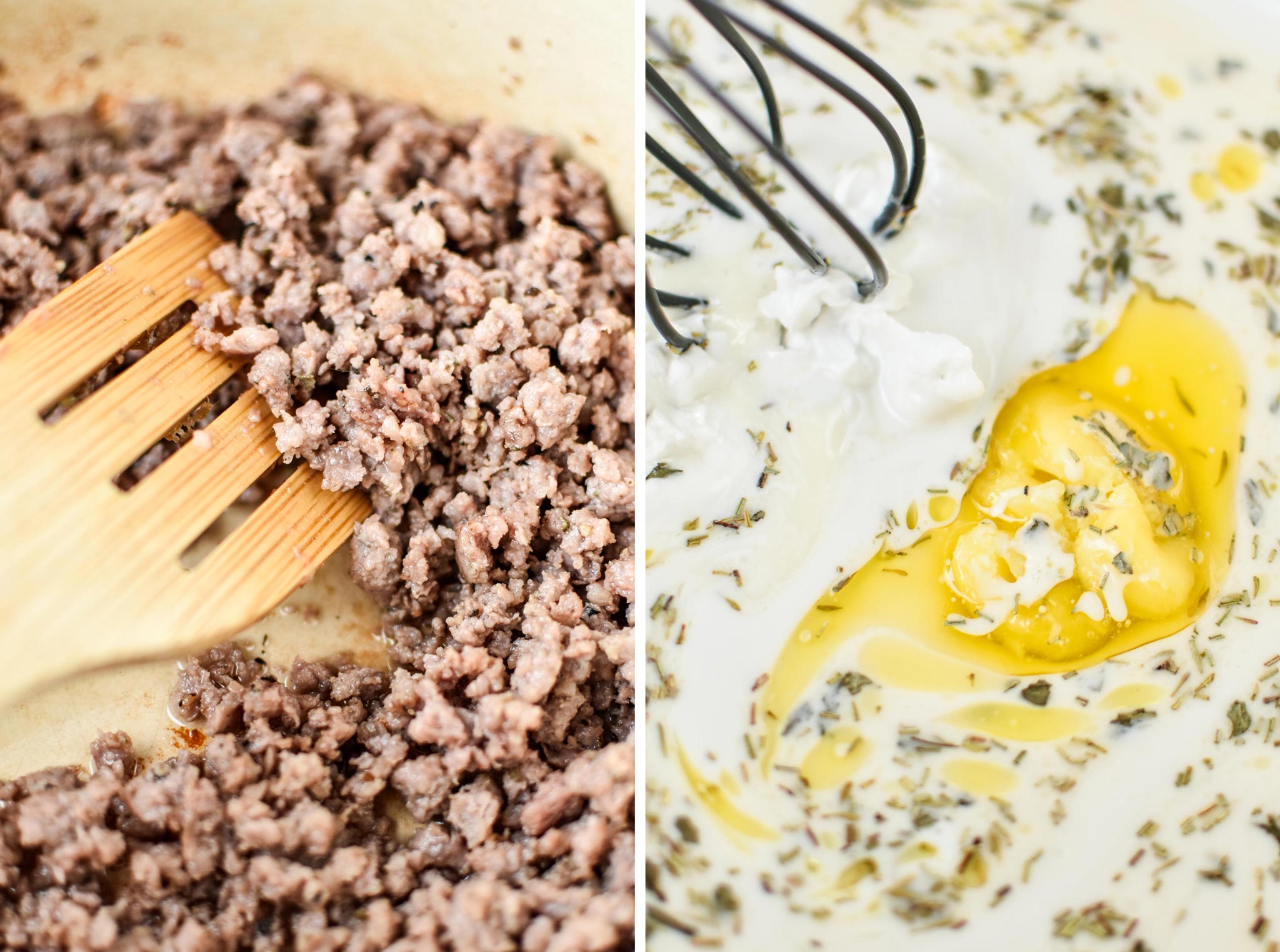 What makes this gravy thick and creamy like regular gravy?

THICK: It’s the arrowroot starch. I use the Arrowroot Starch/Flour from Bob’s Red Mill (affiliate link!) and it works great. It has many uses beyond gravy, and I seriously almost used a whole package during this round of Whole30. This is one of things that I don’t mind using even when not on Whole30. I can’t really tell the difference if I’m not eating the products side by side.

CREAMY: Confession, this is sort of a guess but I’m going with the coconut cream. The recipe calls for 1/2 cup of coconut cream, which is just about how much you get from one can of whole fat unsweetened coconut milk. It’s the thick part at the top – that’s what you want! It’s nice and creamy, so it has to contribute to the creaminess of the gravy. I think the ghee helps a little too. 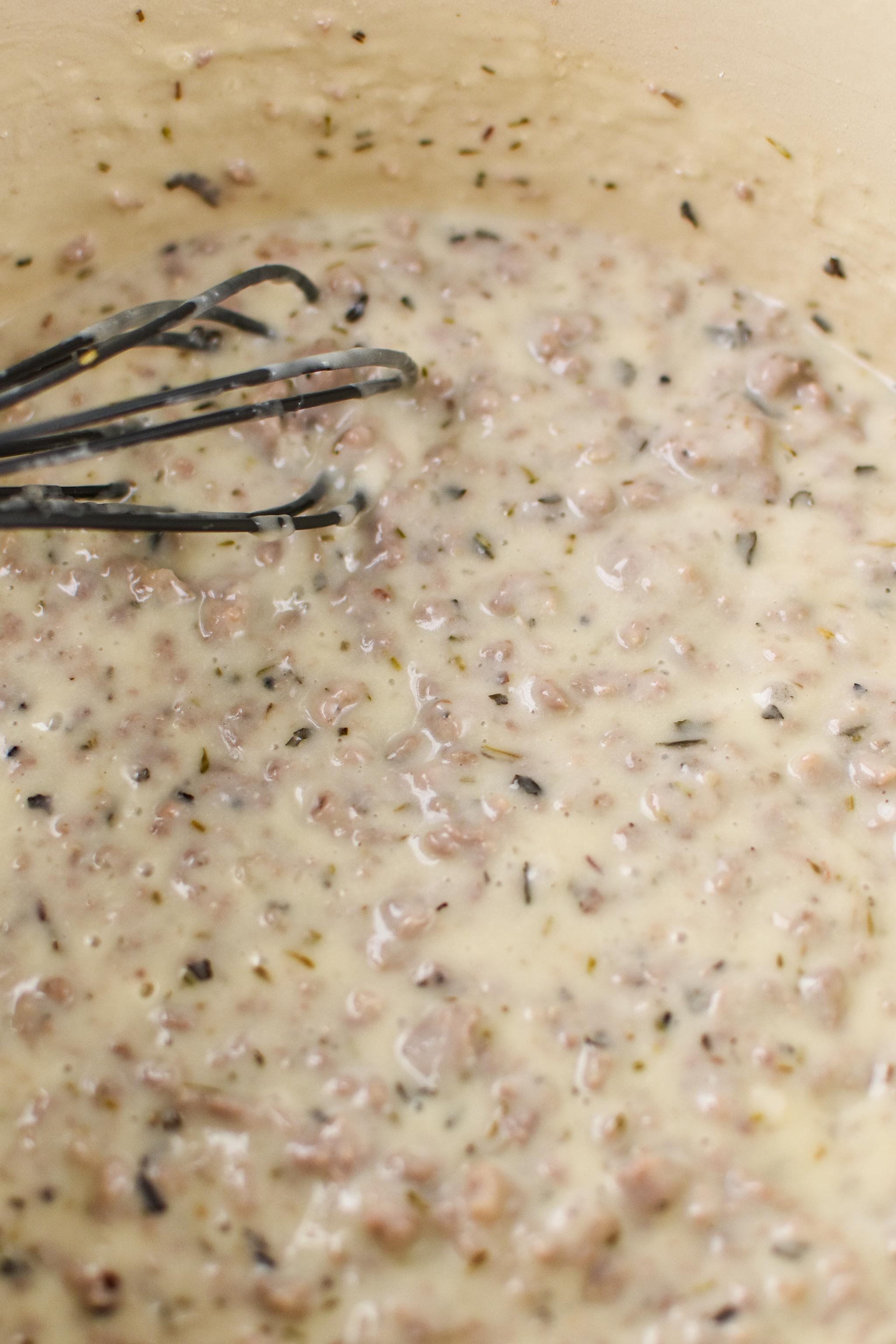 Hold up… Is this considered SWYPO??

SWYPO = Sex With Your Pants On. In the Whole30 program, SWYPO foods are ones made with substitute ingredients to imitate indulgence foods in attempt to satisfy cravings. The example given by the Whole30 community is paleo pizza, made with almond flour crust, lacking any cheese, and so obviously less exciting than real pizza. Your brain knows what it’s missing out on (I dream of cheese, my brain won’t forget about it). So eating SWYPO pizza really just makes your brain crave real pizza even more. These types of foods are discouraged during the Whole30 program, and I can totally see why.

So here’s my answer to the question, is this paleo sausage gravy considered SWYPO? My answer is no. Not for me personally (it’s important to remember SWYPO can be different for different people). Gravy is not something I crave. Gravy is not something we eat regularly. And best of all, this paleo sausage breakfast gravy is the REAL DEAL and I like it just as well or even better than other gravy I’ve had. It’s not a knockoff made with substitute ingredients. It’s made with real ingredients. You’re allowed to make Whole30 versions of sauces and salad dressings, so I see no reason why gravy is off-limits.

What if my sausage breakfast gravy…

Keep whisking! It will help. The whole process of adding the starch and whisking can take a few minutes. Even if there are any tiny lumps, they blend into the sausage gravy along with the tiny pieces of pork sausage and you won’t even notice when eating.

Add some more broth or water to thin it out, adding 1/2 cup more at a time and whisking well between each addition.

Add another 1/2 tablespoon arrowroot starch while whisking and then let everything continue to simmer or low heat for another 3-4 minutes. The mixture will thicken as it begins to cool.

What do you serve the sausage breakfast gravy with?

During Whole30, the main way I ate this gravy was over potatoes with a fried egg and some avocado, just like what’s pictured below. If you’re not doing Whole30, try it over biscuits! That’s my next plan. I currently have some leftover breakfast stuffed potatoes in the fridge that will go with the gravy perfectly.

Yes, this sausage breakfast gravy reheats very well. Keep it in an airtight container for up to 4 days after cooking. Rehat in the microwave on High for 30 second intervals until hot. I would not recommend freezing this gravy, since I don’t think starch-thickened foods do well when thawing. 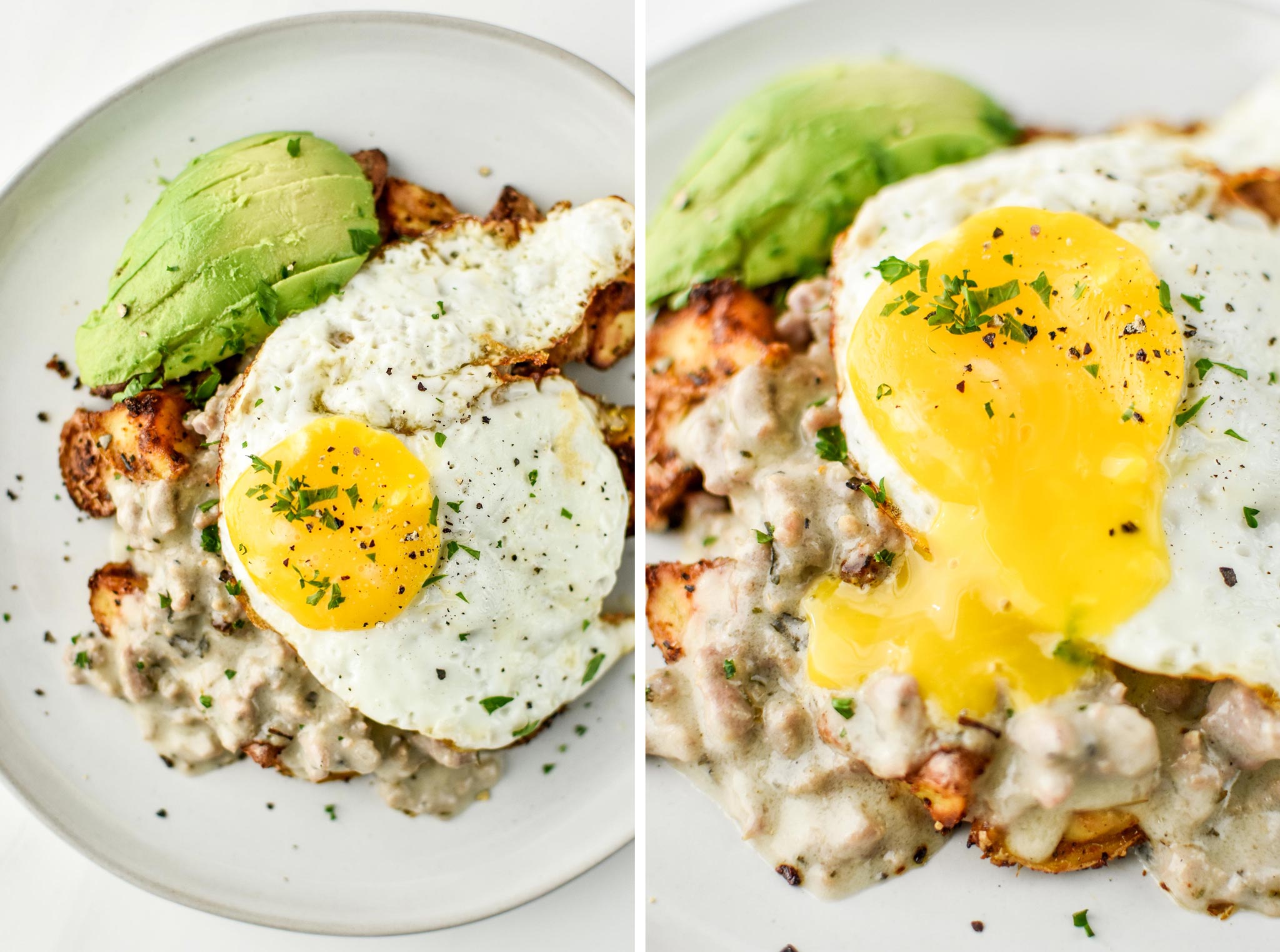 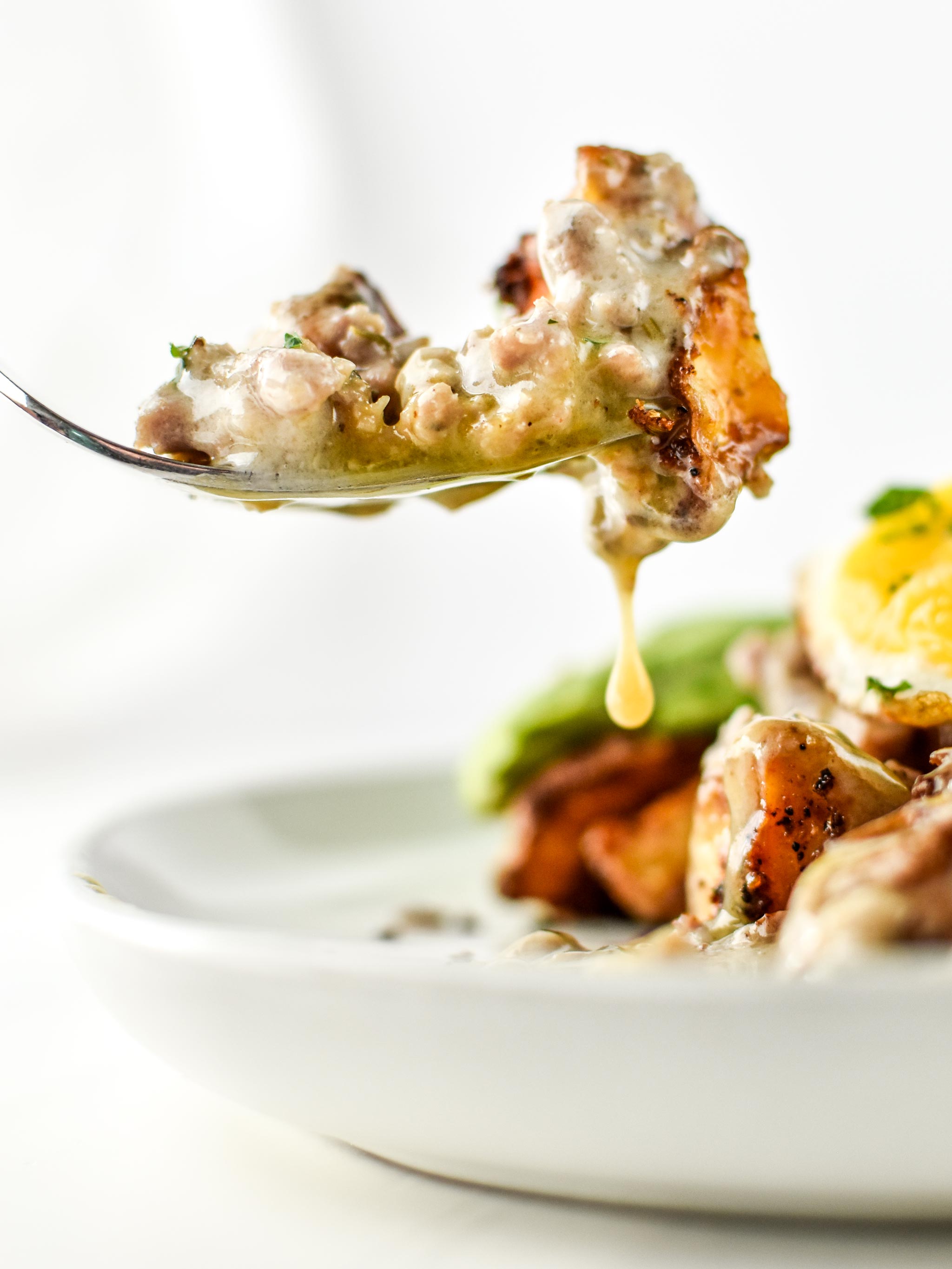 This Paleo & Whole30 Sausage Breakfast Gravy is made using almond milk, broth, coconut cream, and thickened with arrowroot flour for a gluten-free and dairy-free breakfast of champions! Serve over biscuits or potatoes for maximum comfort food status! 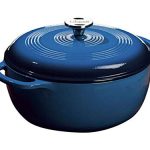 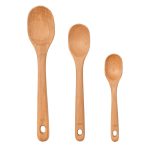 Here’s a great recipe for Whole30 Roasted Breakfast Potatoes from Eat the Gains.

This is my last Whole30 focused recipe for this January. Finishing with my favorite one! I’d love to see how the Sausage Breakfast Gravy worked for you. Tag me in your post or use the hashtag #projectmealplan to share with me!

END_OF_DOCUMENT_TOKEN_TO_BE_REPLACED 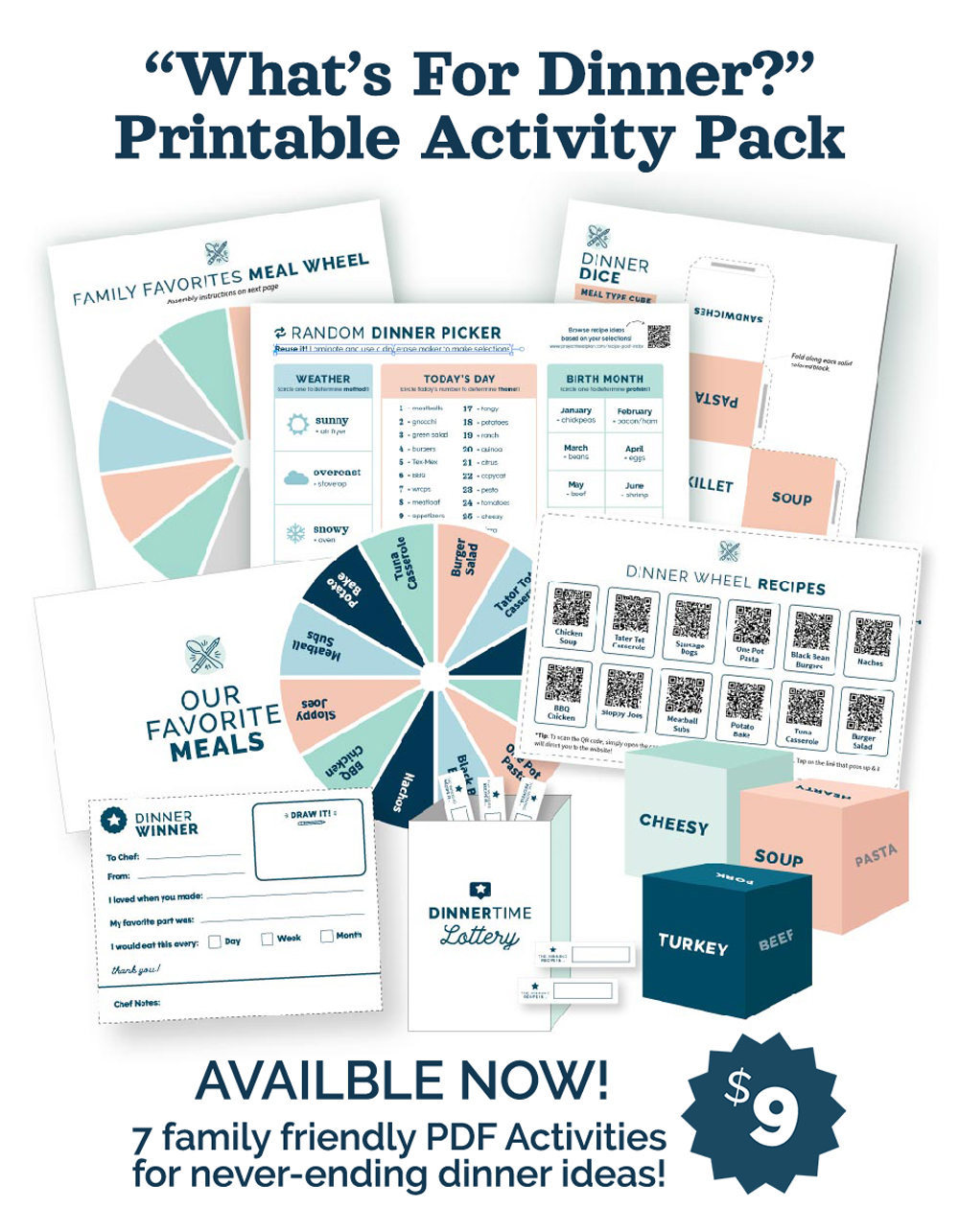